I remember years ago reading a wonderful story from OSHO about Blessings in Disguise. It really struck me as truth and a great example of the ultimate in allowing and not being attached to outcomes. The opposites of good and bad meld together when we are being neutral and open to all possibilities.

Personally, the day-to-day energy feels different to me, and it’s hard to describe what it is I’m feeling. Things feel exaggerated in the general public and in the news: More people than usual appear asleep and unaware of their surroundings, some more frustrated and angry, or more belligerent. People are expressing their fear about the unknown as they see tyrants in public office pushing agendas like armageddon, divide and conquer and racism. Children seem less respectful, running around yelling and screaming in public while their parents are either immersed in their phone or oblivious and not intervening, allowing their children to run around, causing chaos.

On the flip side, there are lots of people awake and aware. Many are practicing gratitude and helping to make the world a great place to live!  People are putting aside their differences and coming together for worthwhile causes. There are also many of our youth involved in all sorts of projects helping to raise awareness.

I am in the service industry now, working behind the counters of a large grocery store. The service industry is known for low wages and high expectations. If I may be so brave as to label this industry a “modern day slavery” industry: Minimum wage for maximum energy output. If you are not meeting the mark (usually one person working two people’s job) then you’re out. Everyone knows they can be replaced.

The Over 50’s Working Population

The over 50’s generation are known for their work ethic. We will usually work till we drop and we started early in life with this mentality. It’s not unusual to find a woman in her late 60’s working a dishwasher position for a busy cafe. It feels normal (and good) to work hard, and weird if we are taking it easy. This has been drilled into us mainly by our parents who did the same without question. We became programed to be good little soldiers.

I’d like to comment on something I’ve noticed and would label as different. Something my over 50’s colleagues and I are noticing lately is that young people don’t seem to be interested in working or putting much effort into their jobs. They seem to be lacking energy and motivation. I am aware of a huge discrepancy in what is considered “a good day’s work.” The youth (17 to 20 year olds) are complaining and tired after an hour of work, whereas the workers in their 50’s are running circles around them. There is an air of concern and questioning amongst the older generation as to what the future holds.

Personally I am trying to figure out what is happening with our young people. I worked hard in my youth, always doing my share of the work, and still do. I need to keep reminding myself about being a witness and staying neutral. As I mentioned earlier, there are some very talented, bright and passionate youth out there. I notice, though, a gap between the two extremes and I know better not to judge or respond emotionally, but I can’t help wondering! Another week passes, and there goes yet one more youth – quitting or being fired. So I have to ask . . . is there a blessing in disguise here? Perhaps. 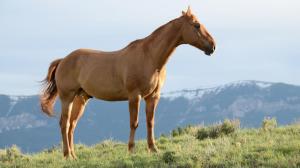 Here is the OSHO story I mentioned earlier. I hope you enjoy it as much as I do!

A man had a very beautiful horse, and the horse was so rare that even emperors had asked the man to sell it–whatsoever the price–but he refused. Then one morning he found that the horse had been stolen.

The whole village gathered to sympathize, and they said, “How unfortunate! You could have got a fortune–people were offering so much. You were stubborn and you were stupid. Now the horse is stolen.”

But the old man laughed; he said, “Don’t talk nonsense! Only say that the horse is no more in the stable. Let the future come, then we will see.”

And it happened that after fifteen days the horse came back, and not only alone–it brought a dozen wild horses with it from the forest. The whole village gathered, and they said, “The old man was right! His horse is back and has brought twelve beautiful horses with him. Now he can earn as much money as he wants.” They went to the man and they said, “Sorry. We could not understand the future and the ways of god, but you are great! You knew something about it; you have some
glimpse of the future.”

He said, “Nonsense! All that I know now is that the horse has come back with twelve horses–what is going to happen tomorrow, nobody knows.”

And the next day it happened that the old man’s only son was trying to break in a new horse and he fell, and his legs were broken. The whole town gathered again and they said, “One never knows–you were right; this proved to be a curse. It would have been better that the horse had not come back. Now your son will remain crippled for his whole life.”

The old man said, “Don’t jump ahead! Just wait and see what happens. Only say this much, that my son has broken his legs–that’s all.”

It happened after fifteen days that all the young men of the town were forcibly taken away by the government because the country was going to war. Only this old man’s son was left, because he was of no use. Everybody gathered–they said, “Our sons are gone! At least you have your son. Maybe he is crippled, but he is here! Our sons are gone, and the enemy is far stronger; they are all going to be murdered. In our old age we will have nobody to look after us, but you at least have your son and maybe he will be cured.”

But the old man said, “Say only this much–that your sons have been taken by the government. My son has been left, but there is no conclusion.”

Just state the fact! Don’t think of anything as a curse or a blessing. Don’t interpret it, and suddenly you will see that everything is beautiful.

In the OSHO Transformation Tarot, this is added with the story:

The only problem with sadness, desperateness, anger, hopelessness,
anxiety, anguish, misery, is that you want to get rid of them. That’s the only barrier. You will have to live with them. You cannot just escape. They are the very situation in which life has to integrate and grow. They are the challenges of life. Accept them.

So, who said working hard was a good thing anyway? Maybe it’s these youth who are revolutionizing the service industry by refusing to give any energy to it and refusing to pay into the slave regime. Perhaps a quiet revolution is underway? The old man is right, I don’t know the future . . . and can only say this much . . . I am noticing things . . . and I’ll hold off assigning any meaning to it by staying neutral . . .

This philosophy can be applied to anything we may be struggling with, it’s a wonderful personal philosophy for staying neutral amongst the chaos and fear that is rapidly descending our planet.

If you are looking for a neat Tarot deck, (I own it and find it is very insightful!)
OSHO Transformation Tarot, Osho International Foundation, can be found here:
Print edition
App

For an inspiring story about self-love and heart healing:
Click below to order a copy of The Path to My Heart today!!!

What are you observing that could be turned into a blessing in disguise? Please share!!

2 thoughts on “Blessings in Disguise”